"Although he stays pretty busy singing around Ottawa, I’d never heard Peter Liu until I played this debut recording.  What a pleasant surprise. Liu, a clinical psychologist by day, has a rich, warm baritone and an abiding passion for love songs, especially old-fashioned ones.  But Bamboo Groove is not an especially old-fashioned album. Yes, the disc consists of 10 songs from the Great American Songbook and three that reflect Liu’s Chinese heritage sung in more or less the same style  — although in Mandarin or Cantonese.  What gives the recording its modern edge are the crisp and often surprising arrangements by Peter Hum, who also plays his usual superb piano..."

"...Liu weaves his way through a songbook of well-known standards with enticing arrangements that give a certain sparkle to each cut.  A very special cut on the album is “Shanghai Tan” fashioned in a jazz swing feel – but sung in Chinese and “Gan Lan Shu” a beautifully introspective and spacious ballad with dramatic sweeps and fills handled by the backing musicians with sincere technique.  Liu has an easy going effervescence to his vocal style; it’s honest and organic in nature, a very pleasing listen throughout..."

"Brooklyn-born vocalist Peter Liu has resided in Ottawa since 1998. His debut record Bamboo Groove (Peter Liu – 101) shows why he has become a popular figure in the Ottawa area jazz scene. He has a pleasant baritone that he uses artfully to sing a program of mostly standards like “Love Walked In,” “Time After Time” and “If I Should Lose You.” The exceptions are three tunes that reflect his Chinese heritage, “A Love Before Time,” “ Gan Lan Shu” and “Shanghai Tan,” all sung in Chnese. His backing group, Peter Hum on piano, Normand Glaude on bass, Tim Shia on drums and Scott Poll on clarinet provide him with firm support. With the dearth of male vocalists on today’s scene, Liu’s is a welcome new voice."


"...He's following in Jack Jones 60s swinging footsteps, with a set card that shows that, but he mixes in modern, jazzy versions of traditional Chinese songs. What happens? It works. No matter what his intentions were, this is the direction it took, sounding like Jones right before the 60s forced him to hit the wall when it looked like he otherwise would have gone the distance. A great way to turn your ear buds into a lounge..." 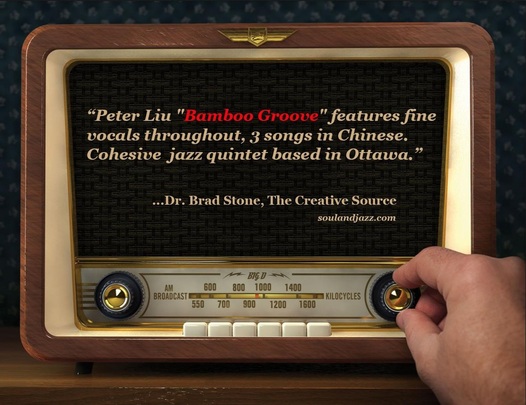 
"...Liu's vocal range is more light baritone but he is able to soar into the tenor territory with ease. His style is both able to embrace to the crooning love song as well as the upbeat repertoire. He also mixes the languages on this recording inserting Chinese pop songs that adds tremendous sparkle to the overall selection..."